Yesterday, I published a post about how I want some more equality in my D&D. Everyone was with me about the depiction of female characters and representing a greater spectrum of skin tones in the art. Where I seemed to lose people was in the idea that people with disabilities could be cool. Apparently, to be worth looking at in a piece of game art, you must be able-bodied, hale and healthy. 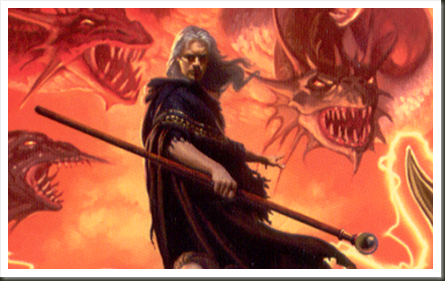 See, Raistlin isn’t exactly Mr. Healthypants. He was a sickly kid, got picked on a lot, and grew up to take a test that destroyed his body and made him a physical wreck of a man. He was weak, he was slow, he had a wracking cough for which he took foul-smelling medicines and which often had him spitting blood into a handkerchief.

Then – and this is important – he killed the Dragon Goddess of Evil. By himself.

Now, maybe that doesn’t mean a lot to you. Maybe, like my friend M, you think that Raistlin was a creepy wimp, undeserving of respect. Maybe, like my friend J, you think that Raistlin belongs in the written fluff of the game, the novels and the short stories, but people like him shouldn’t appear in the art. Personally, I think Raistlin is one of the most beloved characters from the early era of D&amp;D fiction because he is a kid with disabilities, an underdog who came back and proved to be the most powerful of his companions despite his afflictions. He found ways around them, found strength in them, and in so doing became a total fucking badass.

I’m not saying that we should have rules for multiple sclerosis or cerebral palsy in the game. I just see no reason why a character with one of those conditions couldn’t be a total badass in the context of the game’s art. I just see no reason why there shouldn’t be an image of a kick-ass wizard with Lou Gehrig’s (I think we can all agree that Stephen Hawking is the most badass wizard in the world right now).

The arguments brought forth so far are thus: people who are differently abled would be terrible player-characters in a role-playing game; it is already difficult to find cool pictures of player character options in the books and that the inclusion of differently abled individuals reduces the number of cool pictures available; D&amp;D isn’t about the real world, it’s about idealized visions of yourself; and the effort would lead to trivialization and mockery. I’m going to address these things one at a time, but so far as I’m concerned, the only actual argument, the only thing on that list that is not veiled ableism, is the concern regarding trivialization.

It is entirely possible for a differently abled individual to be entirely, 100% fucking incredible. It happens all the time, and you are well within your rights to punch anyone who says otherwise directly in their genitals.
The issue of trivialization is one that I’m sensitive to, though apparently not as keenly as I should be (I was taken to task for a few remarks that were trivializing, and I don’t mind admitting I’m feeling sheepish about that today), and it is an admittedly difficult thing to work through. The issue doesn’t really revolve around the post as it was written, as I was specifically speaking to the art of the game and purposefully avoiding talking about the game’s text, but on re-reading I can see how it could appear I was discussing adding differently abled characters to the game in a text/rules sense.

The path to addressing inclusion of the differently abled is a bit treacherous, as there’s disagreement within the communities of the differently abled about how the topic should be treated, and any action taken on it is probably to offend someone. That doesn’t at all mean that we shouldn’t make the effort, though, and it is imperative that we get incredible people working on it. While it is going to require some tricky public relations work, I think that including anyone and everyone in your game is always a worthwhile endeavor.
Posted by SlurpeeMoney at 9:00 PM

Email ThisBlogThis!Share to TwitterShare to FacebookShare to Pinterest
Labels: ability, ableism, activism, awesome, debate, design, dungeons and dragons, Fifth Edition, I'm probably the only one, ideas, rant, thinking too much

All praise Raistlin Majere, God of the Gods!

I totally agree with you. It is a difficult matter when we talk about it on Dungeons & Dragons, but it would be a welcome change and a desirable one, since it would put an end to that "HP Bar" characters have over their heads. It would also mean we can rip off an arm of that hated enemy and still not kill him (not just the head as they always did with vorpal swords) and most of all, it would mean new possibilities to develop stories and make them part of your character and not just a story that you already left behind to become a "complete" hero.

Yes, Raistlin is an excellent example! I was just thinking about adding another comment to your previous post about Raistlin. I think that to meaningfully include such characters in a game though, there must be an impact on game play and rules, otherwise it's all just handwaving.

I had pretty severe asthma as a kid, and many allergies. Because of this, Raistlin was (is) one of my fantasy heroes, even though now in many ways I find game setting fiction much less interesting. If the PC representation of Raistlin can run as fast and for as long as the representation of Caramon, something is wrong. It's not true to the character, and it's not true to my own experience.

I realize that this has diverged a bit from your original post on art direction, but there you have it.

Unknown said...
This comment has been removed by a blog administrator.
6:30 PM

Well, for obvious reasons Raistlin got a lot of plot armor.