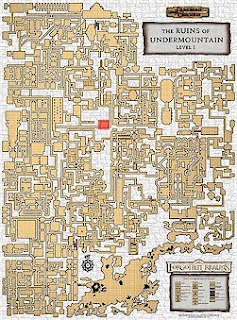 So I've been talking to my friend Ian at the store, and he's pretty enamored of the idea of bringing a classic D&D campaign to life using the 4th Edition rules. Now, I've heard about this sort of thing being tried before, to various degrees of success and failure, so I figured I would weigh in on the issue here.

There are a few problems translating an old school D&D adventure into a new school D&D adventure. The first, and probably the most terrifying, is that the systems were designed to do very different things. First and Second edition D&D was very, very deadly for player characters. This came out of the mindset of the miniature war-gaming crews, where simulation and gaming came before any sort of story or plot (GNS Theory is a discussion for another time). There are still a lot of role-playing games that are built that way, and as the old school renaissance picks up, we'll be seeing a lot MORE of that sort of thing. New school D&D, though, has shifted focus. This isn't about a rag-tag group of adventurers wading through a dungeon in search of riches and glory; it's about a bunch of bad-ass heroes saving princess and beating the face off a dragon.

And that's where the first bit of trouble comes from in translating something like Undermountain to a new school mind-set. Your players aren't playing a bunch of seven-hit-point blood bags, here. They kick ass straight out the gate and continue to kick ever-mightier ass as they rack up the XP and gain a few levels. You can't kill a wizard with a pit trap anymore, because the amount of damage taken from the fall isn't greater than the amount of hit points the wizard could have in the first place (if I remember correctly, the Wizard got 1d4 hit points at first level, and a 10-foot fall caused 1d6 damage). In fact, without an encounter built around them, traps are pretty blah.

Which comes to the second point: encounters. Old school D&D wasn't exactly light on the encounters. You'd probably end up in a fight every second room or so, plus wandering monsters on a bunch of wandering monster tables. In 4th, every encounter is a painstakingly crafted thing, with traps and hazards and choke points and blasts and all sorts of crazy bullshit happening. To make a room matter in a 4th Edition Campaign, it needs to have some sort of encounter or skill challenge going on. One of the cool things Wizards of the Coast did in D&D Encounters: Undermountain chapter one is that they made the whole fucking dungeon a skill challenge. Only the rooms that really mattered were given any sort of detail, the rest were handwaved as the party tried to wend their way through Undermountain's hazardous halls. You can't do that in an old school campaign, and to keep Undermountain's flavor in a conversion, you can't really get away with that either. Instead, each area needs to involve some sort of challenge to be worth checking out, which means that for a map as huge as Undermountain's, you're looking at an overwhelming amount of work. For every possible branch of the halls your players might take, you have to plan that they might go there instead of the way that actually matters... Exhausting.

D&D4 is a very linear game in it's encounter progression. Each encounter is designed to be a challenge, without being overwhelming for the players. Undermountain is a place designed by a mad god who is actively trying to destroy you for his own amusement. That occasionally means getting out of that linear encounter design process and throwing a 12th-level horror at your players, hoping they're smart enough to run the fuck away. In 4th, that's tough; there's an expectation that each encounter is roughly winnable. You may win dragging the corpses of your dead friends with you as you strike the final blow, but goddammit you can win. That expectation is not the players' fault, either; it's something that D&D4 actively cultivates, the idea that with a little sweat and perspiration, the player characters can overcome pretty much anything the DM chooses to throw at them.

My suggestions to combat some of these things were thus:

1. There are a lot of fucking rooms in Undermountain. Some of them are pretty well-established already (the hall of mirrors, for instance). Most are not. So come up with a list of a few things each room might possibly have including: hazards (hazardous terrain, fire, pit traps, a sandblaster, radioactive acid-goo, an R.A. Salvator novel), choke points (bridges, bottlenecks, balconies from which enemies can shoot, dangerous ledges, spaces they'll need to squeeze through), things that make movement difficult (move three or more squares on this sort of ground, make an acrobatics check or fall prone; climb this ledge to get to the baddies; a boatload of difficult terrain; creatures that can slow player characters at a distance), and that sort of thing. Keep in mind that different creatures fight in different ways, so you'll want to know what your party is up against before placing hazards into a room. Which leads into...

2. You can give your players the illusion of choice in their encounters if you want to, while still knowing exactly what their characters are going to fight next. Whether they choose door A or door B doesn't matter; they'll be fighting two fire badgers and a splicks when they get into the next room. You can even have a few of these encounters pre-planned if you like; when they enter Room 6A, they get to fight a White Dragon, sure. Regardless, have your encounters written up, and only place the ones where position really matters. The rest, just do them in the order they're written on your sheet.

3. Again, stealing from the good folks at Wizards of the Coast, the "Undermountain as a Skill Challenge" encounter was brutal for one very clear reason: when someone failed a skill check, people lost healing surges. After three encounters, surges are becoming a prized commodity. To have them heartlessly shorn from you for failing at a skill is devestating. So yes, there are rooms in which there should be skill challenges, and when you fail at those skill challenges, you face a debilitating penalty (oh, I'm sorry, your daily powers will not be recharged on your next extended rest...). When you go traipsing down a corridor without checking for traps, you could very well die. This brings traps back in a huge way; they're not just some thing you put in to add some flavor to an encounter, they're a menace in their own right again.

4. Extended rest fucks with the DM's day. Every time the party gets to recharge all of their healing surges, all of their daily powers, all of their hit points, all of everything, the next couple of challenges are a cakewalk. So fuck extended rest, and fuck the people who take them more than once per session. Push your player characters. When they try and sleep in a fucking hallway, send a monster after them. They want to try and make the room they're in safe to sleep in? Well, that'll take some rolling. Sure hope a beholder doesn't come down the hall to see what all the sawing and hammering's about...

5. This is actually Ian's idea, and it's a good one. There are a few places, even in Undermountain, where you can recover, get some rest, take a nap if you need one and get ready for the rest of the evil. They're few and they're far between, and they're usually behind secret doors and shit, but they're around. Sometimes you'll need to clear out whatever was making the room safe, of course...

So now I want to try it out, and see how it runs. I'll keep you posted on progress.

Posted by SlurpeeMoney at 1:16 AM