Producing role-playing games is not an easy thing to do. There are a lot of publishers out there, and each of them is putting out a product that is about as good as yours is, if not better, and you have to compete with those people for a pretty tight market. The sector is shrinking, as well; the average age of a role-playing gamer is going up, and the rate at which people drop the hobby for something more blink-flashy is going up with it. New people simply are not picking up Dungeons & Dragons like they used to. I mean, back in the day, the best multiplayer video game on the market was Pong, and that game required about as much imagination as D&D to make it playable. Now we have World of Warcraft. 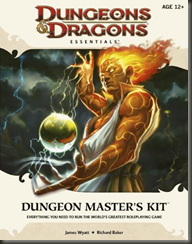 So in a world where a screen has replaced our friends, how do we get people to start playing more role-playing games? Wizards of the Coast’s answer has been to box up some beginner-level products and market them like they did back in the 1980s. One of my first memories of Dungeons & Dragons was picking up the Red Box with the Larry Elmore art on the front, and playing through the introductory adventure with my buddy Landon. Other initiatives, like the Dungeons & Dragons Encounters initiative have been plagued with problems and have actually served to turn players away from the game, so going back to basics and seeing if new players can be found in a simplified rules set and a gaming environment reminiscent of the time we started gaming ourselves seems like a solid plan.

Except that the people who are buying the New Red Box are not new gamers. They’re old gamers who are looking for a spot of nostalgia. And those gamers are pretty damned disappointed by what they find in the box. The new DM’s Kit came out this week, itself in a shiny off-white box, and it is perhaps less disappointing, but still misses the mark in a pretty significant way.

What the Red Box lacks is meat. Or, rather, crunch. It delivers on the promise of a choose-your-own-adventure style character creation method, which is pretty neat. Those of us who played through the original Red Box remember the “You are a Fighter!” mini-solo-adventure from the character book quite fondly, I’m sure. There was a rust monster, and it was dope. This adventure doesn’t have a rust monster in it, and the character creation bits are a lot more spread out between the four classes, but what the book lacks is the ability to build characters that are not made through the choose-your-own-adventure path. Towards the back of the original Red Box were notes on the various classes and a more “normal” how to build your character section. The Elf, Dwarf and Halfling were their own classes back in the day, remember. There was a small section on equipment and money. There were some rules, clearly laid out for people who aren’t afraid of rules, and there was some new stuff for experienced gamers to chew on in those later sections. 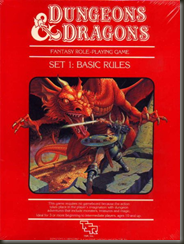 The Red Box players book is entirely filled with this choose-your-own-adventure stuff. Which seems like it would be good for beginning players, but it lacks something that is pretty integral to learning to play Dungeons & Dragons, and that’s easy reference material. There isn’t a place with all of the Fighter options laid out in front of you. There isn’t a page you flip to when you’re looking to see what a Wizard’s hit points per level are. Honestly, the Red Box should have come with a copy of Heroes of the Fallen Lands, or at least an abbreviated version of it (levels 1-3, much like the original Basic Set, with later boxed sets coming out with subsequent levels).

The DM’s kit is, admittedly, a much better product. It comes with some cute tokens for creatures and player characters. There are some maps and a couple of Dungeon Tiles, which is nice because if there’s one thing a DM is usually missing, it’s some sort of mat to play on (though, let’s be honest, a blank grid sheet on dry-erase paper would have been much appreciated). There is a cardboard dungeon master’s screen, and they actually include the whole DM’s book, which is pretty well a rearranged DMG with the errata in it.

Still, where the product kind of falls flat is in the New Stuff direction. Having the current errata in a book is pretty great, sure, but when I picked up the DMG II, I was thrilled to find discussions of Authorship and GM fiat in the book, and hoped that this trend of including indie role-playing theory in Dungeons & Dragons would transfer over to the core of the New Line. New options for ways to handle things like Action Points and dramatic editing and player-directed scenes and the like would have been a godsend. Guidelines for creating new powers or class features or… y’know… anything… would have been great. So while it’s a solid product for new players, it does nothing to cater to the established base, who are the people who actually buy these products.

If Wizards of the Coast wants to bring new players into this hobby, especially with positive associations for their own lines of games, they should really be looking at initiatives like the Heroes of Hesiod mini-role-playing-game they put out to accompany the Monster Slayers books. Get kids playing games with their imaginations, and make it a habit, one that they won’t put away for a weekly 6:00 raid. Give me a boxed set with rules for a Heroes of Hesiod style of game, aimed at the six and up crowd, and I will show you a marked 10-year increase in sales to the teenage demographic of D&D purchasers.

Posted by SlurpeeMoney at 10:49 AM

I wonder whether that's the case mostly to game/hobby stores with veteran players expressing their disappointment. Curious as to whether the D&D Essentials will do well in say...book stores and toy shops in terms of finding new recruits.

You mentioned D&D Encounters driving people away (I assume this was a reference to the awful early Dark Sun encounters) but don't you think it has been a net positive overall? I get the impression that it is drawing some people who played earlier editions(like myself)back into the hobby and even hooking some complete newcomers.

I am indeed referencing the horrifying failure that was the first chapter of Dark Sun. And yeah, we've got some total newcomers to the hobby, but I blame Holly for that more than the initiative itself.

Most of what we see at D&D:E is the same group of people showing up week after week, with little in the way of influx. New people come slowly, and usually they're the types of people who have played in the past.

Honestly, I think D&D Encounters would be much more successful in a Chapters or a Cole's than it is at Warp One. At least there, the hobby gets some exposure to people who have never played before.

Someone should pitch the idea of a WotC/D&D representative going around to different major bookstores and running games for people over the weekend, with advertising for the event weeks ahead of time. Like a book signing.

Yeah. When we were in Amsterdam, there was a place called the American Book Store which was the only place doing D&D Encounters there. We were going to go, but we ended up not being able to (we were leaving for Paris that day, and the guy who was running it apparently... stopped running it...). Still, I like the idea; it makes sense to reach out to new players, _grow_ the hobby some, rather than push the initiative in places where established players are going to see it.

The same goes for the boxed sets, really. I think they should have people hawking those things on the street.