In this alcove lies a human skeleton, huddled under a riven brass shield. It is clad in the crumbling remnants of leather armor. A metal, visored helm sits upright on the flagstone floor nearby.

Nimraith's rest is a pretty simple room. In it, there is one thing, a skeleton under a shield. At least, that's the original encounter as written. If you disturb the shield, you have to deal with a stirge, which is never pleasant because stirges were assholes. In 4th Edition, they're pretty tame little guys. They don't have many hit points, their defenses are low, and a group of kick-ass adventurers taking down a single bug is a pretty stupid encounter.

So fuck the single bug, says I. The obvious answer is to make the stirges a swarm, with a couple of singular stirges kicking around for good measure. But the smallest stirge swarm is a level six monster, and I don't really want to dumb a six down to a one. Another option is a few pesky bugs working in conjunction. D&D Encounters' first skill challenge could end in a random combat with a few different things. One of those things was a trio of bugs; a stirge and two fire beetles. Fire beetles, for the record, are fucking terrifying. 3d6 damage over a blast 3 is insane at first level. With a critical hit, it could take fresh controllers into the negatives. Put two of those assholes in the same encounter, and you've got fricassee wizard.

Normally, when I'm looking at inventing an encounter, I don't take the XP reward system into account much. I know what seems like an easy, balanced or tough encounter to me, and if it turns out it's different from what I imagined it would be like, I change it around on the fly. Today, though, I'm going to break this down by experience point values, because it seems like fun.

I'm figuring on a single flame beetle, at 100xp. It gives out a big burst to begin with, and can be either a recurring threat (depending on how your recharge rolls go), or an easy target for your players. After that, we need a stirge to hearken back to the original encounter, so I'm thinking a single stirge at 100xp. After this, we can get a bit more creative with it. I love minions because they pose a viable threat without overpowering an encounter. So I invented stirgelings by setting their Secondary Role to "minion" in the Adventure Tools, changing the amount of damage it does to a static 3 with 3 ongoing. We're throwing three of these babies in there, for another 75xp. That leaves me with some 125xp to play around with. Just enough for a second-level monster!

Going along with our bug room theme and rocking the swarm idea, let's throw in a second-level centipede swarm. For parties that don't have a lot of blast or burst damage at their disposal, swarms prove a hell of a challenge. For more balanced parties, or parties that love them some mages, swarms are easy pickings, while the critters that hang out around the swarms are a bit harder to deal with. 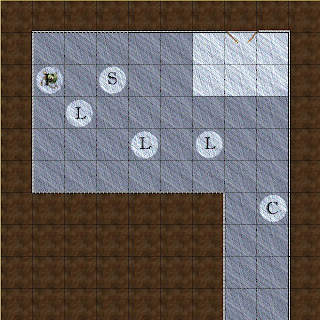 For tactics, I'm thinking the stirges are going to attack as soon as the party is visible to them. They're going to go for the weakest looking characters, even if they're marked; they aren't smart enough to realize they're in danger of the fighter's opportunity attacks, or that the Warden is going to push them away from their food. The fire beetle is going to step out from behind the shield and let go with its recharging blast attack, then hide behind the shield for the extra cover and take a total defense action until the blast recharges. The centipede swarm is going to come from the hall to the south, a good choke point, where it will try to draw their enemies so that they can make short work of them between their own aura attack and the fireballs behind them.

The (F) can be a little tough to see over the skeleton and the shield, but that's where the Fire Beetle is.

The skeleton has some gear on him, but it's mostly useless. The shield is split in half (the word "Nimraith" written across it in Thorass). The leather armor is old and cracked and parts crumble into useless strips of leather when someone attempts to wear it. The rotting remains of a backpack are folded under the corpse containing a moldy mass of cloth scraps and a polished ivory tube worth 2sp. Inside the tube are two scraps of parchment. One is a partially completed map of Undermountain called Nimraith's Map, the other is a scroll with the Comrade's Succor ritual written on it (Dragon, 380), which is a godsend in a place like Undermountain. With it, a group can give up healing surges to give those surges to other players. And in a place as deadly as this, every one of those surges counts.

Posted by SlurpeeMoney at 12:15 AM