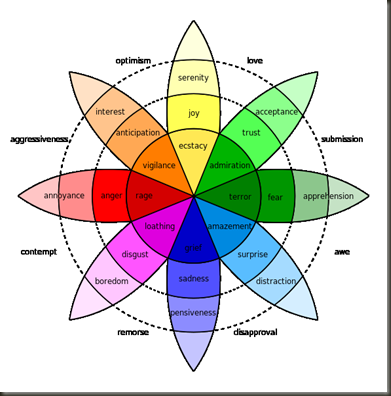 For the record, this thing is fucking awesome. When I went looking around for a list of emotions, this was one of the many possible models I found, and I think that it is easily the most game-worthy. For one thing, it’s already symmetrical, it’s got concentric levels, it’s rocking a solidly game capable shape, and it would look good in black and white in the middle of a character sheet.

What I find particularly interesting about this model is that it’s got a strange number of sections in each point. There are eight points, and four sections in each point. The human mind reacts in kind of a cool way to even numbers and odd numbers. Even numbers it associates with things that are man-made, reliable, constructed. Even numbers are more closely associated with nature, randomness, and simplicity. It’s no mistake that poker deals a hand of five cards, for instance, or that 21 is the number you’re aiming at in Blackjack.

So the chart above is blessed with some inherent level of order and structure based on just how many points there are and how many sections there are per point. It’s given a bit more natural a feel by having curved edges and a flower-like design, but there is definitely something constructed about the picture, and that actually works for us in a strange way. The game we’re building is one that is built out of chaos and strangeness; any points of order we can find, regardless of how seemingly miniscule, will have a great impact in defining and balancing the game’s aesthetic.

As a playable board, the graphic provides us with some interesting new options. In my previous article, I suggested we should be doing each emotion on a 10-point scale, something like Sanity or Morality. But now I have this adorable four-point-per-emotion circular scale I can play around with, and the possibilities open right up as far as system is concerned. I’m still thinking points, but I’m thinking about ways to make the points and the scale in the picture interact. How many tracks can you have points devoted to at once? How many degrees of separation can you have? For instance, is it possible to be pensive and apprehensive at the same time? Yeah, it is. Is the grief somehow lessened by feeling apprehensive? No, not really. So trying to come up with ways for these tracks to make sense as part of a game mechanic is going to be sort of interesting.

This has been sitting in my drafts folder for the better part of a week. It’s not perfect, it certainly needs some work, and I’m struggling with making it as elegant as possible, but I figure I’ll post this up, mull it over and pick it up again when I have something worth writing about it.

Posted by SlurpeeMoney at 5:34 PM

The "Awe" and "Disapproval" bits seem juxtaposed. Is it just me?

To be fair, I didn't come up with the chart. The image is from a wikipedia article about emotions and visualizes Robert Plutchik's theories on the nuances of human emotions.

From the wikipedia article: "He suggested 8 primary bipolar emotions: joy versus sadness; anger versus fear; trust versus disgust; and surprise versus anticipation. Additionally, his circumplex model makes connections between the idea of an emotion circle and a color wheel. Like colors, primary emotions can be expressed at different intensities and can mix with one another to form different emotions."