Then we hit a seminar called Pink Dice and Pony Dungeons that was supposed to be largely about how to design games for women. The secret, of course, is don’t design games with women, but instead design games that are inclusive of women, and design games that are targeted at an audience that includes women, but not specifically for women as a demographic. Except, that isn’t really what we talked about; the seminar quickly devolved into another discussion of table politics, and as much as I enjoyed the previous talks about table politics, I was looking for something a little meatier on the design side. I’m a System Matters kind of fellow, I make a lot of noise about how system should and can influence and change the social contracts that come into play when we hit the tables.

When that was finished, we did some more Exhibition Hall, but this time I had a plan. We found the Indie Press Revolution booth and bought every book they had that I don’t. That, for the record, always feels really, really good. Then we went and took a big nap. Then, N got a pair of boots she’s been obsessing over for over a year. Which I think is something that is very cool about GenCon; you can see a thing one year and then obsess over that thing for a whole year and then you can come back and buy those things.

We went to the playtesting hall again and played a cool game built with wooden pieces and leather board tiles, and the game itself was actually a lot of fun. It was something of a mixture of monopoly and RISK, bringing in some of the best elements of each and leaving the boring shit out. There was a distinct lack of a catch-up mechanic if things went against you, and the way the cards were built meant that some players were catching cards that were more relevant than others, but the overall theme of the game was pretty sweet and most of the mechanics were really elegant and smooth.

N then went to a Cards Against Humanity tournament and got a trophy. Like so. 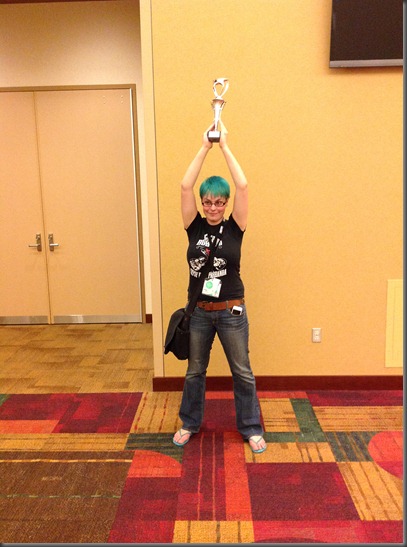 I did not win any trophies. Instead, I went to play Fiasco at the Games on Demand room, and was not at all disappointed in that choice. Fiasco is a very different role-playing game from most that I’ve played in that it focuses on two-player interactions and builds stories from a mixture of relationships and conflicting goals. I’m pretty sure I was the only person at the table who really understood what was going on and how the game is supposed to be played. But I get that feeling a lot…

Then we went to the restaurant in the JW Marriot where we got to hang out a bit with A and C, I met a Conservative Christian American business owner who I got along with famously (he bought me tequila, the fine bastard), and we had a great dinner and great conversation for the rest of the night.

Tomorrow is the last day of the convention, and the last day we’ll be in the United States. I would be willing to say that this go at GenCon has been my favourite. I’ve played more games, met more cool people, seen more cool stuff than I have at any of the conventions beforehand, and I would be more than happy to go again. When we were on our way here this year, I was a little on the fence about whether or not I’d want to make the trip out for a fourth go as soon as next year. There are other places I want to visit; I want to get to Asia one of these years. I have dreams of seeing Australia and New Zealand. I want to visit Africa. So do I really want to invest in yet another GenCon in such quick succession?

Posted by SlurpeeMoney at 11:47 PM