I love busted shit. I’m not sure why exactly, but I find some joy in things that aren’t exactly what you would expect. Versailles has squeaky floors. The Mona Lisa is tiny and ridiculous. My plane’s wing was obviously experiencing some technical difficulties.

That isn’t to say I ever felt unsafe; I love flying and I trust that they would not let the plane fly with a flap that they knew wasn’t working. And I can’t be the only person to have flown in that plane and seen that the flap was clearly blowing in the wind. It’s just not something I think about often. How busted can my plane be before I need to worry about it? When I think about airplanes, I almost always think about the jets in an idealized, pristine form. I’ve never worked with planes as an occupation, I don’t get to see their guts or deal with them in anything approaching a real way, so when I get into one, I just assume that everything is top-notch.

My plane was not top-notch this time around, and that’s sort of interesting for me to see. Like 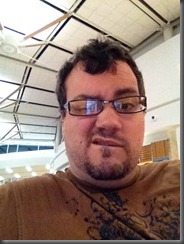 checking out the inner workings of a cruise ship, or staying in a hotel room that is set to be refurbished soon, it’s a cool look at the inner workings of the travel world. I’m usually so detached from that industry – even when I worked in the travel industry, it was at a remove from the nitty gritty bits – that to see something very clearly real on the trip is a strange sort of exciting for me.

The Phoenix Airport is shit, by the bye. I’ve been to a remarkable number of airports in the past five years, and Phoenix is the second worst of the bunch so far. Understand that the worst airport I’ve been to was worse by an incredible margin (do not go into the washroom in a Cuban airport, guys; it left me shaken), but the experience I had there was pretty stupid.

Maybe it’s a cultural thing, but when the airport is starting to fill up with people, I put my bags in front of me, or under my seat, or both if I’m travelling heavy. Often, I’ll put them there anyway, because I don’t feel like my bags deserve a seat of their own. They’re bags. People need those seats.

Phoenix Airport’s patrons included Gucci and Oakley bags. One lady had bags taking up two adjacent seats. N and I had to sit on the floor, which was more comfortable for me than it was for her. She gave me a nice massage, which was awesome because I was functioning on an hour or two of napping and trying to sleep on the plane. I can’t sleep in moving vehicles. It’s a curse. Still, we shouldn’t have had to sit on the floor. There were dozens of seats available, if people would just put their fucking bags on the floor. We weren’t the only people on the floor, either. And people got mad at us for taking up too much space.

I take up a lot less space when I sit in a chair. Just sayin’.

Getting into Vegas proper was a lot like coming home. I’ve been here three times in the past five years, and it hardly feels like a vacation spot anymore. It’s more like going to my parents’ house, if my parents’ house was filled with gambling and strippers. We got in and had a 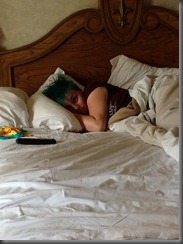 horrible/awesome buffet before heading up to our rooms and sleeping until the middle of the day. I played some poker and lost. N and I drank some vodka and watched Shark Week and the closing ceremonies of the Olympics. Today, we were going to go see the Tournament of Kings at the Excalibur, where we’re staying, but they want $75 per person to see it, and food, getting to the hotel, and one night of gambling has completely sapped our Las Vegas budget. Instead, we’re going to do nothing.

The convention itself is going to be a gong-show, and I fully expect to stress out while I’m there. I do every time I go, even though I’m having an incredible time. Having some time to wind down and chill out for a couple of days before hand is going to be necessary, I think.

On Imperfection in the World

We have a tendency to make things perfect in our fantasy, which makes sense because by its nature, fantasy is a glorification. It’s a way to make things brilliant and over-the-top and ridiculous, but still inherently believable and true. Perfection is something we’ve come to expect in our fantasy worlds; palaces are immaculate, swords are without flaw and glint in the sunlight, and when something is poor and dirty, it’s poor and dirty in just the right way.

The floors at the Palace at Versailles squeak. Take a 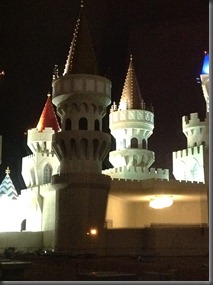 moment to think about that. In the world’s most incredible symbol of opulence and privilege, the floors squeak. Almost nothing in the world is perfect, and that makes perfection all the more remarkable when it’s found. The mark of the greatest artist is the ability to free-hand a perfect circle, if you believe the myths. A perfectly balanced weapon carries the same weight of legend that a magical sword might.

Work imperfection into your world. The floors squeak, the rafters are dusty, the lacquer on the tables peels, the glasses have water spots and the chairs are comfortable but shift a little uneasily when you sit in them. The dungeon walls are made of hewn stone, cut well but with years of wear; the magical sword you’ve picked up has two notches in the blade from use, and the hilt has been covered by worn leather because the original is too smooth for proper use. The dwarf-king’s throne bears a mark of chiselled graffiti three hundred years old, carved during the last succession war. The floorboards are uneven; no secret compartments or anything, the floor is just fucking uneven because it’s old.

This makes the world more inherently believable, because our own world is riddled with imperfection. And if you make perfection rare, you can give it impact that it might not otherwise have. A masterwork tool is a thing to behold, in a world where perfection is a rarity.

Posted by SlurpeeMoney at 2:00 PM