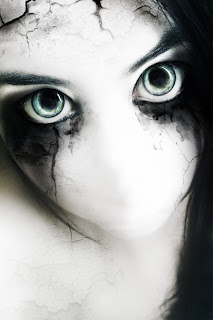 Sometimes I like making up new monsters. When I find a particularly fascinating image or someone says something that hits me in my deep places, I'll usually write a story here, but there are occasions where I see a thing and think "Well shit, what sort of encounter would this make? Where would something like this live, and how would it make that space insanely dangerous?" When I saw this critter, I thought along the latter lines; there's probably a story in there somewhere, I want to see that creepy girl with the too-big eyes and no mouth fuck some bitches up.

I'm imagining a psychic baddie. Like a siren that sings to your mind while you're traversing the already deadly Astral Seas. Off the starboard bow, you see a pair or trio of naked, ivory-skinned women who sing out to you like the voices of a dream. When you come near to them, they feed from you, draining your mind of it's ability to think or act or feel. When an Astral Siren does damage to you, it's damage to your memories, your thoughts, your philosophical reflections, your personality. Even when she's defeated, an Astral Siren leaves scars on your mind. There will always be a few things you can't quite remember, things that sit on the tip of your tongue, but you can never quite get them out. Is that just the effects of growing older, or is that something the Siren took from you, something you'll never get back?