Two broad steps lead down into a widening room crowded with a forest of stone pillars. Archways can be seen in its northern, western, and southern walls. Something metallic glints on the floor, among the many stone pillars.

This is the first room of any note in the original Undermountain campaign. There is a single piece of gold lying on the floor, and a rat that scurries away to the north. That's not an encounter, ladies and gentlemen, that's barely worth note. So we're going to beef this up a little bit. I'm saying, corpse of a dude lying on the floor, and a Dire Rat, a couple of Giant Rats and a Rat Swarm are feasting down. There are skeletons, as well, picked clean by the rats already. They're not the get-up-and-stab-a-dude sort of skeletons, they're just some dead people.

Now, this encounter is a lot like this past Wednesday's D&DE: U encounter. There were some rats, and people killed them, and it was good. If you've got a well-balanced party, it isn't a terrifying encounter by any stretch of the imagination, but if your party lacks some form of close blast or burst attacks, the swarm gets very crazy. I took out a player, and another almost bit it. This encounter doesn't have a clay golem thingy making psychic attacks all over the damned place, but that's probably for the best. Being dazed while there's an aura attack running around is no fun at all.

I wish I had some way to rebuild the maps from the Undermountain Map pack here. I can't wait for that functionality on the Adventure Tools package. Instead, I was forced to use Campaign Cartographer 3, which is a lovely program in nearly every way, except that it's damned near impossible to figure out just by winging it. You'd think there would be an easier way to make a fucking map, guys... 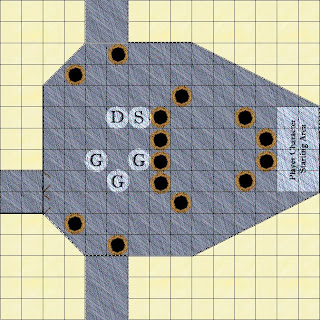 In this encounter, the location of the pillars doesn't matter much to the rats. Set them up however you like.The rats aren't really going to use the pillars to their advantage, anyway. They're just going to attack the first thing that looks like something worth eating. Which of course means the creatures that are not covered in plate armor. They'll try and get at the squishy controllers and maybe the strikers first, but they'll change their targets as the marks start to fly.

The half-eaten guy has 10 gold pieces on him, some useless armor (it didn't do him much good, anyway…), a long-sword, and a torch. The skeletons each have three gold pieces on them, and there are four skeletons.
Posted by SlurpeeMoney at 3:04 AM

Apparently I need to learn the ins and outs of Microsoft Word publishing to blogger. It makes everything look stupid. -_-