I was waiting for Ian to get me an encounter before I was going to post another one, but I needed something to write about today, and he’s had like, two weeks to make that happen. So I’m doing another one. Room 4 in the original Undermountain campaign didn’t have anything in it. Room five had a bad fight. So “Encounter” 4 isn’t actually much of an Encounter.

I guess one of the problems with old school Undermountain is that sometimes it’s horrifically boring. The two rooms coming up are pretty good examples of that. One of them is empty, except for a couple of loose cobblestones, and the next has a pretty mediocre fight against two bugbears, and the life history of a whole party that probably never made it through this room in the play-test. The second room, in particular, insults my sensibilities as a Game Master. I mean, I can deal with a flavor room with some random treasure. But room five of Undermountain is so obviously a tribute to a lost party that it hurts my brain just to think about it.

I think the worst part of it is that the party isn’t even all that interesting. They’re just a bunch of dudes who died fighting some fucking bugbears.

These encounters aren’t much different from the originals. I needed to share the pain…

The floor of this area is strewn with
stony rubble, and gray, dust-shrouded
cobwebs hang from ceiling to floor,
blocking all view of what lies within.

This room is basically empty. There are no creatures, and whatever may have made the webs is long gone. The rubble on the floor ranges in size from tiny pebbles to fist-sized chunks. If you put all of them together (a task that will take a good long time), the stones form a statue of three human warriors standing atop a rounded hump of stone. Each faces outwards, and is holding a short sword; the statue is well-crafted, but beyond broken. It might be worth as much as a few silver to a collector who would want to reproduce it.

If a character makes a DC 20 Perception check, he or she will notice a couple of loose flagstones, under which they’ll discover the skeletal remains of a human hand and a sack holding eight gold pieces. The coins are stamped with the Hammer and Anvil of the trading dwarves of the Sword Coast.

In this chamber, many bodies lie -
both human and those of tall, armored,
hairy creatures with long ears 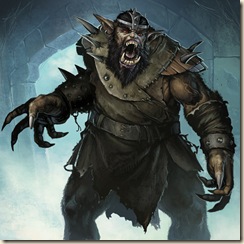 and fangs. Only two figures move in
the room, searching among the bodies,
grunting and snarling to each other.
One breaks off and raises its head to
look your way!

The two creatures are bugbears, a warrior and a shadow walker. The bugbears will attack ferociously, seeing themselves as outnumbered and outgunned, their only hope of survival resting in a strong and immediate attack. If the player characters start to beat face (bloodying them, or killing one), the bugbears will simply try to fight past them and flee. They will only fight to the death if the death in question is that of the player characters.

If the bugbears do manage to escape, they will begin stalking the player characters (+12 stealth), and waiting until the party is weak or asleep to attack again. 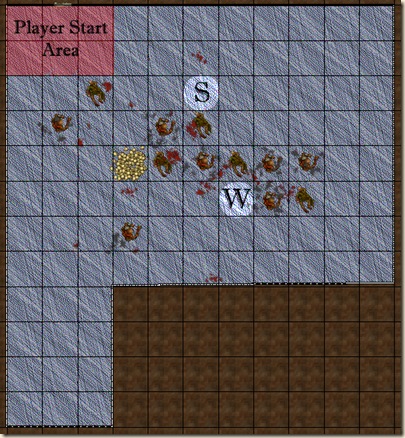 Corpses: Each square occupied by a corpse counts as difficult terrain.

Pile of Skulls: The pile of skulls provides partial cover (-2 to ranged attacks against a character with cover), and count as difficult terrain.

The corpses, recently slain, are those of seven bugbears and five human men. The skulls are likely trophies kept by the bugbears. The men were all novice adventurers, much like our heroes, trying their fortune in the most dangerous dungeon in the world. Feel free to come up with some adventure ideas.

The original adventure gave you a bunch of history on each of the corpses, and a detailed description, but I’m not going to do that here. Personally, I think the Black Banner Band was one of Ed Greenwood’s crews, or maybe the party of a play-tester or something. There is a LOT of detail, let’s put it that way.

The total amassed treasure in the room is as follows:

Picture by this guy: Benwootten

Posted by SlurpeeMoney at 3:15 AM