Pictures of a Harrowing Battle 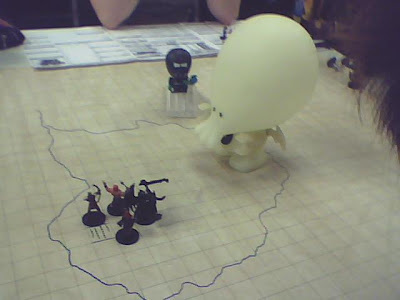 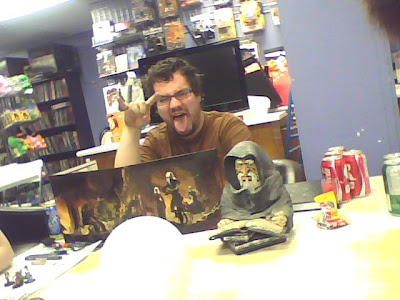 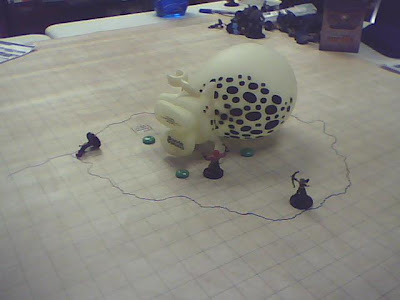 Looking at the first picture you can see the heroes preparing to face off against the Colossus of Tarsil. I didn't have any gargantuan miniatures at the store that I was willing to crack open for the project (just a few of the blue dragons from the 3.5 minis line), so I spent a while looking around for an appropriately sized action figure. My Little Cthulhu takes up about as many squares as a gargantuan dude, and so it became the Colossus and worked fairly well. Behind him, you can see Ninjathulu, who I was using to represent Babagya, the first recurring villain of the game.

The second is a picture of me, rocking my DM face. In front of the screen, holding down the edge of the mat, is a wizard my boss got for my center. I'm sure he's for sale. Behind me, you can see the old Tournament Center television (currently a piss-poor monitor over by my own work-station), and some of the anime center.

After a long and harrowing battle with the Colossus, the party was victorious. Though Babagya escaped to wreck havoc another day, the party managed to survive to come kick her ass in the next time she shows her nasty face. The third picture shows the Colossus defeated. The green dots show the borders of the creatures space-occupancy.

Next time, we're hoping to have either a sound recording or straight-up video.
Posted by SlurpeeMoney at 8:21 PM