Sly Flourish keeps doing things I love, which is probably why his blog rocks and he’s getting paid money to design game elements while I am working in a shop that sells things he makes. One of the things he’s done recently is an “Extreme Reskinning” of a white dragon into a horrifying assassin monster. Given my desire to come up with kick-ass, innovative, over-the-top monsters for my home game, I figured I’d give you guys a peek into how I go about doing that.

I don’t usually start with a solid idea of what I want a monster to become. Instead, I pick a creature and figure out how to make that creature as badass as humanly possible. For the challenge of it, I decided to start with the single sissiest monster I could think of: the unicorn. Turns out, unicorns are only level nine monsters, which is good because my party is now higher than ninth level, and I can never use this monster against them.

First thing’s first, I take a look at the abilities. A unicorn gives it’s buddies a +2 defense bonus, attacks with hooves, charges for double damage, makes people unable to attack it, can teleport and can let an ally spend a healing surge. All in all, not terrifying, and I think a couple of the abilities are going to have to change. Since we’re looking to make Senior Sissyhooves into something badass and terrifying, I definitely think we’re going to have to rearrange the unicorn’s stat bonuses in different directions; rather than grant bonuses to allies, a horrific monster penalizes its foes. So the +2 defenses for allies is going to become –2 defenses for enemies, while the healing surge power is going to become a healing surge steal.

Throwing in Some Flava

The new abilities make the monster sort of vampiric, a leech, which is the direction I think we’re going to flavor this particular monster. I tend to flavor monsters after their abilities more than the other way around; if a monster heals its friends and gives them bonuses, it sounds like a something noble and upright (I’d go unicorn, pegasus, faerie, Great White Harts, that sort of thing). If a monster lowers defenses and then eats your healing surges, I see dark, lurking evils. The sorts of things that live under your bed and slowly suck your life from your body.

This monster, after some digging around on DeviantArt, is going to look like this: 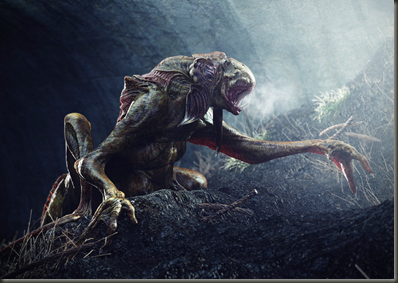 With the creature’s identity a little more established, I can start doing the actual reskinning. I’m going to say the creature still lives on a large base, and is probably still a fey magical beast. Hit points and defenses can stay roughly the same, speed will come down a little bit to six, but the perception is going to get upgraded to blindsight; the creature lives in the shadows and sees without its eyes.

The basic standard attack is going to become a bite attack instead of a kick. The charge is actually going to be a jumping charge (since this guy looks like he’s going to jump onto your chest and bite your face off), which will still push the target and knock him or her prone when it hits. Fey Beguiling is a nifty ability, and to add some creepy to this thing, I think we’re going to continue calling it that, but to make the same effect as the Unicorn (majesty, power, refinement), this thing is going to sing a creepy lullaby that charms its enemies.

Teleportation is a little weird for this guy, so we’re going to downgrade it to jumping five squares. And teleportation is a pretty big deal (kills grabs, removes the threat of Opportunity Attacks, etc.), so we can be a little more generous with the last ability. Horn Touch lets one of the unicorn’s allies spend a healing surge or make a saving throw against an effect a save can end. We’re going to take a healing surge away from a creature, and use it to heal this little vampirey badass. Horn Touch is an encounter, we’re making ours a Recharge 5, and we’re dropping any reference to healing surges.

Finally, instead of having Nature at a +10, this guy’s going to have a +10 Dungeoneering, reflecting many years in the Belowground and some Stealth so he can sneak up on some player characters. Our stat block looks like this:

Posted by SlurpeeMoney at 2:15 AM

Email ThisBlogThis!Share to TwitterShare to FacebookShare to Pinterest
Labels: bestiary of badassery