Bestiary of Badassery: Master of Puppets

Sometimes, you start with art. 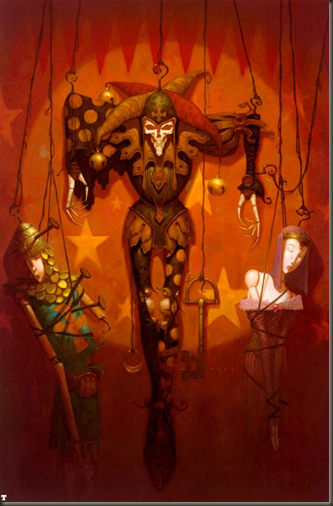 For the record, Brom has never painted anything I’ve hated. His work is moody, surreal, and gave Dark Sun and Nightbane their _edge_, y’know? His spooky paintings make you ask questions, and the answers to those questions are often monstrous and strange.
Also, I’m reading his book. It’s quite good.
So the questions I’m asking of Mr. Sadness the Clown here are thus:
1) Who are those people, and why do you have them dangling from barbed wire?
2) What does the key open?
3) The little bauble on you right side: what is that?
4) Where did the nails come from? That looks very uncomfortable.
My own answers to these questions are:
1) The young lady is a warforged wizard. She was specifically designed to look and act like a human girl, but there are still signs of her mechanical nature (she looks a little doll-like in places). The young gentleman is a damsel in distress. By the look of it, he is quite distressed right now.
2) The key opens a door that is actually a portal to a place where a dingus lives. The dingus in question is very important to the quest of our heroes. Alternatively, it opens nothing. That would be unfortunate.
3) The bauble on his right side is the monster’s pull-string. If you somehow manage to cut the string off, he has a short time to act before he powers down entirely. In the alternative situation in Answer 2, this is the real key.
4) The nails having nothing to do with this monster. The nails are a gift from the monster in the next room.
So what exactly is this guy capable of? I think, for one thing, dominate effects are in play. Because I like the interactions with players a little more, I’m going to suggest that my own “Possessed” status might be a better choice; players get to choose one action to perform, but the monster chooses the other two actions for them.
Barbed wire is slightly horrifying, so we’re going to have to work in ranged binding attacks that are sustainable and deal damage. The creature will also have horrifying minions that do it’s bidding which aren’t actually a part of the powerset, but more a question of encounter design. Having something of a spider’s web of possessed people trying to kill you can be pretty horrifying.
I’m also thinking that this creature is stationary. He’ll have one of Chris Sims’ donut auras that makes him nearly impossible to kill from range, so the player characters will need to wade through the minions (and maybe a lieutenant or two) to get to him.

Formatting tables in Windows Live Writer is stupid. I may need to look at new blogging software. Again.
Posted by SlurpeeMoney at 7:00 PM