My favorite feature in Dragon Magazine was the Bazaar of the Bizarre. Magic items are one of the things I love most about Dungeons & Dragons, and the distinct lack of kick-ass magic items in D&D 4E makes me pretty sad. Much like I miss the awesome write-ups of monsters from the 3.5 era of D&D, I miss items that have personality and history attached to them 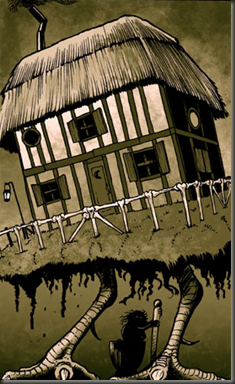 . So I’m going to be providing some of that here.

This week’s entry is one of the best-loved inventions from my home campaign. Our first Big Bad, Babagya, was, as mentioned in previous posts, Baba Yaga from Slavic myth. She was a horrifying witch woman who stole babies and ate them, flew in cauldron she rowed through the air with her broomstick, and lived in a hut that walked around on chicken legs. As the campaign progressed and Babagya began to grow away from her source material, the player characters discovered a culture of nomadic dwarves that built houses with chicken feet, and managed to win one of these amazing prizes for themselves. Since then, it has become one of the party’s favorite NPCs as well as one of their favorite items, and I kind of think of it as the mascot for my campaign.

The chicken huts are works of alchemical and magical art. Roughly as intelligent as a four-year-old human, they are capable of independent movement and don’t need to be personally directed to each destination. Simple directions will usually suffice. They allow their tenants to cross huge distances with all of the comforts of home; you can read a book while crossing dozens of miles. They never tire, don’t need to eat or drink, and are happy, willing servants of the people who live within them.

The dwarves that create these marvels have never sold one for money, though they have been known to accept challenges that would reward the winner with such a home. These challenges are never easy, and are almost always skewed in favor of the dwarves. Those few who can claim to have won a chicken hut truly deserve one.

Picture Jacked from Tumblr, but it doesn’t say from whom.

Posted by SlurpeeMoney at 2:01 AM