So I’m actually writing some of this session review before the session happens. I’ve got some pretty intense stuff happening this time around, and I figured it would be best if I could just get some of it down before the session goes live, and fill in the blanks when it’s done. Obviously, I’m going to erase this introduction before I publish the post, but it’s nice to have a draft to come back to when the session’s done.

The first thing to take a good look at is the Social Combat system. I’ve designed the Headmaster at the Extreme Library around this sort of encounter as a solo who will give up when he’s bloodied. With completely average damage rolls, it will take 19 hits to finish him off; not a ton, just enough to see how the system works and where it needs to be tweaked a bit. Here, have the whole encounter!

This is how things usually go at the Extreme Library:

1. You go to the front desk and request a book.
2. The bookaneers go and get that book for you. This can take weeks.
3. Depending on the level of difficulty getting the book, you pay a fee.
4. You get your book.

The player characters are on something of a time-budget, though, and can try and convince the woman a the front office to let them go after the book themselves. That will, of course, cost something, as the Extreme Library makes all of it's money from it's book delves. Determining whether or not the players will be able to get the books for themselves (and at what cost) will be a Diplomatic Encounter.

On your Turn: Choose Bluff, Diplomacy or Intimidate as a Fight, Defend or Manouever action. Roll that skill vs. the opponent's Passive Insight. If the check is successful: 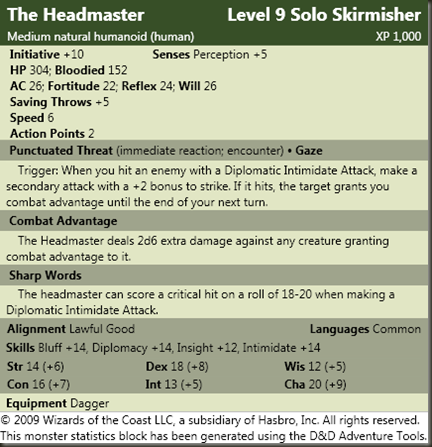 So looking at his stats, he’s got a social AC of 22, and a +14 to hit on most of his attacks. That’s pretty much in line with level 10 rolls, though he was hit a little too often, and didn’t do enough damage to be a real threat.

The player characters actually knocked this guy around pretty easily, and it was slowly turning into a slog at about the point he was bloodied. They were going on all-out attack, which is fine against a guy like this, but he simply wasn’t dishing out damage on a level to be a decent threat. I think the next social combat encounter is going to be a lot higher on the damage dealt, with a higher Insight check; I want to see people using Maneuver and Defense rolls as well as just straight-up attacking.

The second thing I’ve done today is fuck with movement a bit. I incorporated a bunch of notes that constitute something of a miniature skill challenge; success on the skill challenge means you don’t take boatloads of damage.

The Extreme Library is built into the side of a huge ocean-facing cliff. It falls thousands of feat, hangs miles over the ocean (held up by the Cage Spires), and some say that the bottom is some sort of dimensional rift to where every book ever made in every language, written on every possible material has come to rest. It is an insanely dangerous place, due to the huge number of dangerous creatures that guard the various tomes of incredible value here and the certain doom that awaits anyone who falls.

To get around on the walls here, they will need climbing and rappelling gear. The DC to climb down, using appropriate equipment, is 5 (just with half their level, every PC makes it); the shelves make for easy climbing, as there are plenty of hand and foot holds, but it is exhausting work (DC 22 Endurance check every hour, or lose a healing surge).

With a DC 20 athletics check, you can also "swing," which allows you to "fly" up to half your speed side-to-side (and diagonally down), but you need to begin and end your move action on the "ground."  While swinging you can make a melee basic attack as a minor action once any time during movement, without provoking an opportunity attack. You may swash your buckle at any time during this movement or attack.

Attacks that require two hands CAN be done, but provoke an Immediate Interrupt from Gravity that slides the character two squares.

If you fall prone, fall ten squares and take 2d10 damage. Your rope will save you from most of the damage, but not all of it.

The party made it through the first encounter using these rules, and while they didn’t look any different on the map, the shift in perspective from top-down to side-scroller resulted in a few moments that couldn’t have happened otherwise. Things like “falling as a charge” or “jumping on the gargoyle’s back” that would be completely ridiculous in a top-down map orientation.

Posted by SlurpeeMoney at 3:58 PM

Seriously? Not ONE mention of the awesome use of my fangirls?