I don’t really talk about Magic: The Gathering much on this blog. One of the big reasons for that is that I don’t really play much Magic anymore. I play a lot more D&D, specifically 4th Edition, and I write about what I’m playing. If all I was playing was Settlers of Catan, you’d be seeing a lot more about Thief Placement in my blog.

But part of my job is selling Magic, and part of selling Magic is selling singles. So I was working on putting my binder together for Magic 2011 today, and I came across this: 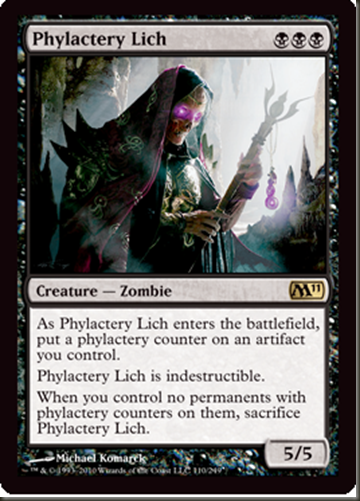 I would have seen it in the spoilers had I been paying any attention, but to be honest, the core set spoilers are always a bit of a disappointment for me. I was so excited at seeing this card, that I actually brought it up to show my co-worker, Matt. It is a beautiful card, one of the most flavorful designs I’ve seen on a Magic card. It evokes all of the right emotions for a lich; it’s indestructible, but if you destroy the thing that houses its soul, it will die like anything else. It’s powerful, and it’s a cheap road to power, but that power comes with  an intense vulnerability.

I think one of the things that’s missing from most depictions of liches is the connection the lich has to the phylactery. I mean, there’s the obvious “If this thing is destroyed, then my life is over” connection, but I mean the more emotional connection the lich must feel for the receptacle of its soul. One of the things that caught me about this card was the almost tender way the lich holds  the scepter, the sense of real, personal attachment. It isn’t gripped like a thing that will bring you power, it isn’t held aloft like some prize. It’s cradled, gently, in the creature’s undead hands, like he might start whispering to it.

It’s for this reason that I think liches can’t be without their phylactery. It makes so much sense to build a phylactery, dig the deepest hole imaginable and then bury the fucking thing in the earth. Or seal it in some pocket dimension to which only you know the secret of opening. But liches never do that. They make finding their phylacteries a big deal. They hide them, but in a place they can get to if they want to go see it. Some of them, I’m sure, keep their phylactery on their person; there’s no reason not to, really.

I imagine having your soul stuck in a jar feels like every good thing in the world has just disappeared. All that is left is dull, grey eternity. And there’s a way to get the good things back. The good things in the world live in the jar. All you have to do is let them out, except that if you do, you’ll be destroyed. And you’re afraid of being destroyed more than you miss having joy. So you carry the good things around with you, wanting them to be close to you, even if you can’t let them be a part of you anymore.

Also, I’m sure the card will find a home in a couple of good decks.

Posted by SlurpeeMoney at 8:41 PM

You forgot Andrew Jackson’s Big Block of Cheese with nary a macaroni in sight.