One of Our Best Fights Yet

We played a single encounter in our Bones of a Dead God campaign today, as one of our players needed to go to work early in the night. That single encounter took just under three hours to finish up. Here’s the stats I was running off of: 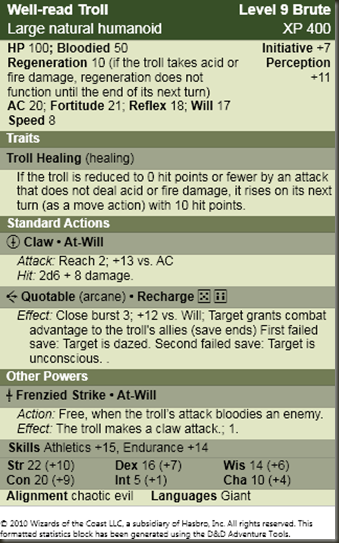 Four of those. Also, two Two-Headed Trolls from Dungeon Magazine. Though, I actually eneded up using three of each for the encounter as played. I toned the Two-Headed Trolls down from Elite, though, making them a bit more easy to handle. Also, I kept forgetting they had two heads, so I was playing them as straight-up brutes.
The fun bit of the encounter was less the creatures and more the layout. The players began above ground-level, literally getting the drop on their opponents. There was a cliff some eight squares away from where the characters could just fall, necessitating that they swing in on ropes (some athletics checks). Some did so, while others hung around in the back. The paladin was immediately hit with two hits of Quotable, pushing him down to dazed. There was a power-round in which the trolls took it to poor Triptych, dazed and beaten and then, very quickly unconscious (from failed saves on Quotable). One of the two-headed trolls picked up Triptych’s body and started using him as a club, going after Memphis and slapping him upside the head.
Triptych makes his save, waking up and magically trading places with a slightly-pissed-off Memphis. Trip delivers the final blow on the troll, and the troll starts to fall… Still holding Memphis in his hand. Memphis dives for a rope, but falls a long way before he catches anything. He slams into the cliff, taking a HORRIFYING 10d10 damage from the fall, the catch, and the crash. He survived, wounded from the event, but not unconscious (a very real threat to life here…). And he lost his hat.
For those unaware, whenever Memphis’ hat becomes threatened, there is a chance the character will go completely batshit crazy, run up to people, and fire bullets into them with wild abandon. So, losing his h 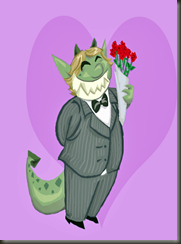 at, he is super angry. He climbs up the cliff with a dislocated arm, frenzied, and starts shooting every bad guy that moves. Skull’s familiar, who is also her brother, who is also a dragon, dives for the hat, pulling him out of combat for the rest of the encounter, but he isn’t fast enough to get it right away.
Triptych gets back onto the ledge (having been brought by the troll, as a weapon, to beat on Memphis, who was not on the ledge), and starts laying down some smack, as well as healing his own broken self. He gets in a few good hits, takes down one of the trolls with the help of Kage (who made his first appearance in a while this session), and turns his attention on helping the injured (Memphis).
Skull, until this point, has been tossing bits of magic out from her safe position on the r opes. She can hit guys that are close to the edge of the cliff without having to move, and she’s more than happy to stay there until her space starts filling up with trolls. One gets close enough to attack her directly after she summons her new spider friend (from an item). The troll tries to swing back to the cliff, but the spider attacks the rope, cutting it with its jaws, and kills the troll attached to it. Skull is pretty impressed with this, until a troll knocks her ass off the cliff with its club. She flies off the cliff, falling out of reach of any of the ropes when, from below her, she’s hit by a little dragon wearing Memphis’ hat! Woot!
She crawls her way back up the cliff as a couple more trolls get picked off, and when there are two left, they start to spread out (much to her consternation). She blasts one full in the face, and kills it, but doesn’t like that she wasn’t able to kill the second in a huge blast attack. They clean up the last of the trolls, and camp out on the cliff for the next few hours before heading further down the cliffs.
Posted by SlurpeeMoney at 9:11 PM

Email ThisBlogThis!Share to TwitterShare to FacebookShare to Pinterest
Labels: bones of a dead god