One of my all-time favorite low-level spells in D&D3.5 was rope-trick. The idea was basically “You occasionally need to run away, and sometimes that can be hard. So here, have a thing that will let you run away once per day, should the shit hit the fan.” It would create an extra-dimensional space that would house up to six creatures comfortably (though it was pretty unspecific as to the size of those creatures (an important point), and would last long enough that the wizard could recharge his or her dailies and everyone could heal a bit before heading back into the fray.

When we were running the Savage Tide adventure path, Jason Scott (who is lovely) invented a wondrous item for me that was a permanent Rope Trick spell cast in my hat. Placed against a surface, it would create a portal to an already-created rope trick dimensional pocket, one that was the size of six colossal creatures, and could thus house an entire apartment. I wore my whole house on my head, and could duck into it if things got really hairy. Also, it worked as a super-bag-of-holding, letting me carry as much stuff as could fit in a large apartment while weighing no more than a pound. It was pretty great.

Over at This is My D&D Game, the rope trick has been resurrected as a ritual. It’s a pretty sweet ritual, one that I will probably be giving my players access to when they hit level twelve (which should be in about four weeks). Also, for nostalgia’s sake, I’ve written up the Hat Trick as a Wondrous Item for those wishing to use it in a 4th Edition campaign. 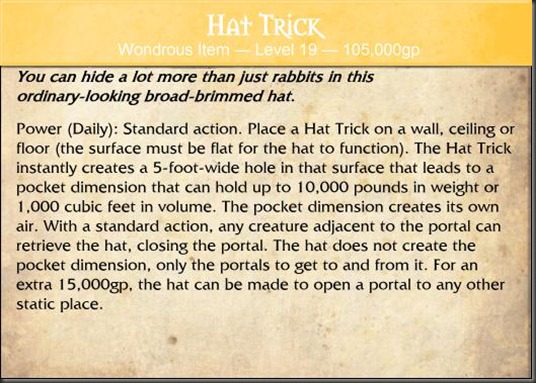 Posted by SlurpeeMoney at 7:01 PM