The Tools of the Trade

Once upon a time, all I needed to create a decent session of D&D were some pencils, paper, graph paper and some books. I remember spending weeks in my bedroom cooking up whatever it was my friends were going to have to face down, writing notes, copying them out on new paper when they started to get scuffed from eraser marks, changing stats and editing tactics. A lot of the enjoyment that I got out of the hobby was what my co-worker Matt likes to call “Lonely fun.” It’s the stuff that happens between the sessions, plotting and planning your way through the next few encounters and plot arcs.

Oh how the times have changed. I do all of my planning by computer now. For one thing, I type faster than I can handwrite, and that has nearly enabled me to get my thoughts down as I’m thinking them. It’s also a TON easier to edit something if I don’t like it. And basically any piece of information I could possibly want to research is sitting at my fingertips the whole time I’m planning. With the D&D Adventure tools available to me, I have access to every monster yet printed for the game. The compendium sets me up with every feat, ability, race, magic item, power, trap, ritual, and even a full glossary just in case I forget what grapple does. The character builder is, to be perfectly honest, the best way to build characters for D&D 4th Edition. While it doesn’t always have every option from every book right away, it catches up fast, and if you build a lot of characters (like I do), the ability to craft a decent sheet in five minutes (as opposed to an hour) can be desperately important.

But the stuff the Wizards of the Coast has put out still isn’t as strong as a third-party piece of awesome called Masterplan. I have no idea how I thought I could plan sessions without this thing. It takes all of my session notes and arranges them by plot point; each plot point can be given an encounter or a skill challenge if I so will it, and the encounter notes will stay keyed to that event. The stat blocks can be input directly from Adventure Tools xml exports, so that you can keep one set of stats for multiple bad guys and just increase how many there are. I haven’t had a chance to play with the tileset feature much, yet, but I’m looking forward to also being able to set up my maps on the computer and reference them whenever I like.

Technology has made my planning a lot easier over the years. And while some people may decry the fact that D&D 4th is uniquely set up for long-distance, Skype-style play, I think that this is one of the most powerful things about the new edition. In 2008, the good folks at Wizards of the Coast showed us this: 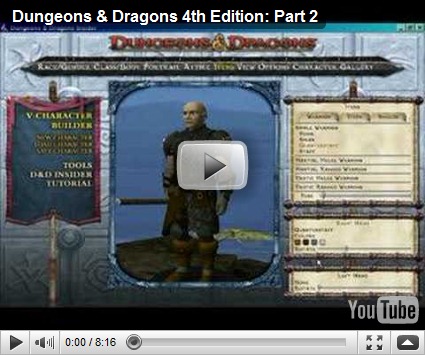 Now, I know enough about how people read blogs to know that you either didn’t watch the videos (because they’re really boring) or that’s all you’ve done and I’m now talking to myself.

When D&D 4th was announced, I was as concerned as anyone else about the future of the game. I mean, any time a new edition is brought out, people rail against it, but I’ve been in the business long enough to know that, as long as the New Hotness is actually pretty cool, people will come to accept it. I hadn’t seen much that I was impressed with in Star Wars Saga (the playground in which Wizards showcased a few of D&D4’s new mechanical bits), but when I saw these videos I started to get really excited. I’m not the type of person who has difficulty finding a group of people to sling dice with, but I know a lot of people who, for whatever reason, can’t find a group. I talk to one or two of them every week, people coming in to lament about how they keep buying books even though they haven’t been in a group for years. The ability to play online would be amazing.

Hell, the ability to play with the gametable just for dungeon design would be a godsend. Having a suite of tools that would make me able to play D&D entirely from my laptop would eliminate the need for a DM screen. This is what I would need:

We have most of these things available to us already. There are a million dice rollers on the internet. Instead of getting the guy who wrote Masterplan to take out the functionality that accessed the D&D Insider compendium, offer him some money. As much money as you’re paying the guy who is supposed to be making something just like it. Then integrate the program into your own tools. Do the same thing with Familiar. And with all the free time you’ve just given your in-house programmers, have them work on a program that will snap the images of Dungeon Tiles to a grid, and send out your prototype Game Table.

A lot of the things in that video were promised to us in 2008, and they looked almost done. With all of quality the tools third-party guys are making for D&D4, and with almost nothing coming out of the folks in Renton, you have to wonder what’s going on here…

Posted by SlurpeeMoney at 5:38 PM

Yeah even for someone who is relatively new to the RPG hobby, I've noticed my switch. I recall my Fireman Tim & Ixidor character sheets being marked up in pencil and trying to be as neat as possible in order to not mangle up the sheet too badly when I had to erase things.
I personally prefer flipping through paper when I DM though. Just can't justify printing the monsters and junk just to throw them away. So netbook it is.

Reads my reviews about male enhancement pills befor your buy male enhancement products that really works and effective to increase your health and better your life. thank you. you can reads this reviews at http://www.male-sexual.com - vimax pills - penis enlargement