Chapter Eight: Come at me Brocean

I got in a fight with the Pacific Ocean today, and it whooped my ass fairly handily. 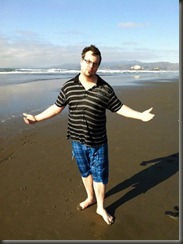 Yesterday, we went to the wicked-huge Golden Gate Park. At the end of the park is a beach, and on the beach, the offending ocean. It and I got into something of a disagreement last night, as it was convinced that my shoes would be a good place to live, and I was of the opinion that the ocean belongs damned near anywhere but my shoes. So our relationship was off to something of a rocky start, but I was wiling to give it a second chance.

The next day, the ocean decided that being really, really cold was a good way to get back at me for not letting it live in my shoes, so we started an all-out brawl. I tried to walk into it, facing the horrible cold and wetness, while it would throw waves at me. It was not the most effective way to fight the Pacific ocean, perhaps, but I enjoyed myself, and that’s all that really counts. After watching me flail, my ally came in from building a fortress to aid me in battle. She lost pretty good too. There are pictures to document our shame.

The surfers seemed to think we were crazy like crazy people, and I don’t blame them for that, but I think we had way, way more fun than anyone ever should playing in a cold-ass ocean. I just learned on wikipedia that the folk at Ocean Beach don’t take kindly to out-of-towners stealing waves. I suppose that’s sort of what we were doing, but to be fair, we were two assholes from Canada doing our best impersonation of polar bears. I understand your plight, guys, but we were only there for a couple of hours.

Next time I’m in San Francisco, I go surfing. I meant to this time around, but we ran out of money before we got around to it, and it’s pretty expensive to do.

Next, we went to the corner of Haight and Ashbury, mostly because Dave told us we should. Mostly, it was like a more commercialized Whyte Ave, which would have been sweet if we had more than $20 at our disposal. Even then, there have been some four areas of town N and I have identified as Whyte-Ave-Except-X. We didn’t do a whole lot there, but we did buy some bread, cheese and meat, and sat on the street eating our lunch, much to the chagrin of rich and high-class shoppers that kept going into the store we were sitting in front of.

Being homeless is interesting. Being seen as homeless is also interesting, and is worse in the States than it is in Canada. I was wearing a hoodie and jeans, with a backpack on my lap. I looked like a homeless dude, and people let me know through stares and by rearranging their stuff so that I couldn’t steal it. I sort of wanted to get a sign that said “I’m not homeless, I’m Canadian.” Makes me feel bad for the people who are actually homeless in this country.

Tomorrow we go home. We have to get up, eat pancakes, pack, and be on a plane. Either later tonight or tomorrow, I’ll be writing up entries for how each of these chapters can be used in role-playing games. Then I’ll be posting it as a separate post, as well as editing each chapter. It will be very awesome.

Posted by SlurpeeMoney at 6:36 PM