I find it slightly difficult to believe that I wake up at nine thirty on a regular basis when I’m on vacation. When I was at GenCon, I would wake up at seven or eight, pick the girls up at nine, and be at the con for nine thirty. Normally, if I’m doing that, I’m a fucking wreck, and it’s definitely taking its toll on me in San Francisco. I keep putting it off until later and later, and this morning that meant a dearth of pancake goodness. We weren’t really accounting for the weekend influx of people, so I ended up eating a half a pancake, making sure N got at least one solid pancake first. I’m a sweetness like that.

A fellow in the common outdoor dining area had his computer and camera stolen today, and was pretty upset about it, understandably. I’m not sure what it is I don’t like about him, but the few times I’ve spoken to him, he’s seemed a little off somehow. He gives me shivery-bad feelings and I don’t like his moustache.

Our day today was not as jam-packed as our days have been. Having already seen and done damned near everything we wanted to do, we spent some of today going through lists of “Things to do in San Francisco” and trying to find something we haven’t already done that doesn’t cost any money (as we’ve basically run out of anything more than ramen cash). We didn’t find much, but there were a couple of neat-looking parks, and we hadn’t seen the ocean since we’d arrived, so we decided to make both of those things happen. 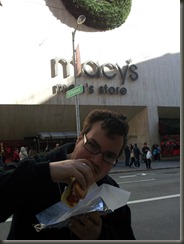 I like to try something I’ve never done every time I go on a vacation somewhere. Eating a hot dog from a hot dog stand is one of the most incredibly American things you can do. It’s like going to a baseball game without the boredom. Or shooting the skin off of people we don’t like, without the mess or the questionable racial connotations. Eating a hot dog at a hot dog stand is an American thing to do, and by the gods I meant to do it this time. I’ve been to the United States a lot of times in the past five years, and I had never once eaten at a hot dog stand. So, today I did, and I am happy to say, the experience was pretty great.

I mean, it wasn’t the best hot dog I’ve ever eaten. That title goes to the incredible Fat Frank’s on Whyte Ave. But it was certainly a passable wiener. Moreover, it was exactly what my body wanted at that moment. Some meat of undisclosed components, some bread that was a little too sweet, some stuff that was trying valiantly to be vegetables in the form of a red-pepper chutney. It was tasty, and it made me feel, for a moment, like America might be the greatest place on earth.

But the Obama-is-Hitler people were out again, so the feeling didn’t last long. M commented on my Facebook status when Chapter Six came out that the Obama-is-Hitler folk had a good point about the Glass Steagal banking restrictions and that Obama isn’t exactly an amazing president. And I’m willing to grant that some solid banking restrictions are in order, here. But both Glass and Steagal were Democrats. Republicans aren’t about to start throwing down restrictions on banks, and the Democrats aren’t exactly running someone against their own incumbent president. Short of a civil war, there aren’t a lot of other options. 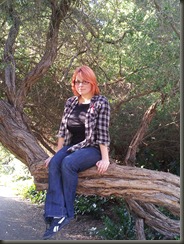 After hot dogs, we decided to take a bus down to Golden Gate Park, which is a huge-crazy-awesome park that takes up a huge chunk on the west side of the city. The bus ride was a lot of fun, but I’m starting to think that San Francisco is trying to hide something from me. I have yet to find a place in the city that isn’t gorgeous, which makes me wonder where the poor people go. I have been told “Oakland,” but it’s a little hard to believe they made a whole other city in which to keep the poor people. The bus was pretty full, but we managed to find a seat in the back and check out the awesome architecture that is this beautiful place. If I was going to live in a place in the states, it would probably be here.*

The park is gorgeous. Much later in our walk, I read a little plaque talking about how the guy who founded it wanted to make sure that it was wild and strange and twisty and wonderful. They went out of their way to make sure there was nothing of the city of San Francisco in the park, and they wanted it to be a safe haven from the grind of the city. There are spectacular trees and beds of flowers, there are small ponds where ducks and seagulls live, there are windmills that used to carry irrigation water to the plants further up the hills. There were many hot dog stands and many, many dogs, most of which were adorable. 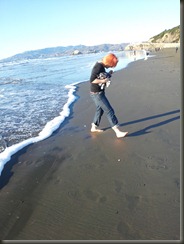 We decided at one point that we were going to walk to the beach, and that became something of a driving goal for the trip. We determined which way was west, and made most of our travel choices based on what would get us as far in that direction as quickly as possible. Occasionally, we would have to take a detour. Golden Gate Park was designed with twists and turns on all of the roads through the forest to keep the place from becoming a wind tunnel, so there was never a path that ran directly from where we were standing to the place with the sand and all the waves. At least once, we would find a group of people and follow them, trust them to guide us in the direction we were supposed to go. At least twice, I decided the beach was very close because I could hear it or smell it or both, and then it turned out to be farther away than I had thought. I am not good at finding the ocean.

There was a buffalo. He rolled around in the dirt for a while, and it was adorable.

When we finally found the beach, the waves were incredible. I hadn’t come with swim trunks or anything, and I loathe walking with sand in my shoes, but we decided to take a stroll down the beach anyway. N took off her shoes and went wading a little way in. Apparently, the water was quite cold, but it was still a lot of fun to run away from the waves and watch people surfing in the distance. The waves were huge, thrashing things that gave some warning as to their reach on the beach, and because I was still wearing my not-at-all-waterproof shoes, I played a game of tag with the sea foam and looked like a total idiot. It was a blast, and we’re going back tomorrow if it’s nice.

Then we came home and I typed a blog.

*So far. I mean, I’ve only seen a few cities in the country. Also, I never, ever want to live in the United States, except when eating hot dogs there.

Posted by SlurpeeMoney at 8:46 PM