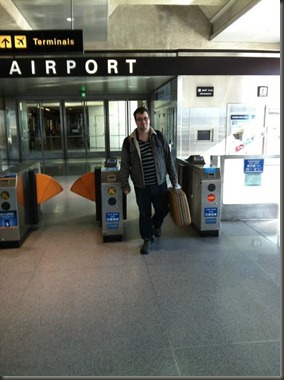 Vancouver International, for those not in the know, is a goddamn maze of horribleness. Did you know that the United States isn't considered an international flight? Me either. Moreover, did you know that Air Canada has some three different check-in stations at the airport? I sure didn't. So, we were happy we got there with two hours of lead-in, because a process that normally only takes about a half hour took us just over 45 minutes this time around.

Then our plane was an hour late.

Still, miracle of human flight and all that. We boarded, tired as all get out. I watched most of Captain America, which was about as good a comic book movie as one can ask for. Maybe I've written about this already and maybe I haven't. If you've heard it before, feel free to skip to page xx. I have a few different scales for movies. I have a scale to see if a movie is just a good movie. Jurassic Park? Good movie. BioDome? Not a good movie. I enjoyed it, don't get me wrong, but it was not at all an amazing cinematic masterpiece.

Captain America is a damned fine example of a good comic book movie. It is too cheesy, too contrived, too over-the-top to be a good movie, but it is entertaining and sticks to the character of Steve Rogers pretty damn well. Personally, I would have taken it in a bit of a different direction, especially with the Red Skull and Hydra, but that's why they don't give me millions of dollars to make movies.

I didn't get to finish it. I will likely watch the rest on the way home.

We arrived in San Fransisco on a beautiful sunny day and immediately spent the next hour underground on the Bay Area Rail Transit system, or BART. This brought us to within spitting distance of our hostel, but because I'm not great with directions, we got lost a few times along the way. The hostel is cozy and quiet compared to those I stayed at in Europe, though I suppose that makes sense with it being winter and all.

We went for something of a stroll after taking a well-deserved nap, and wandered China Town and the financial district. San Fransisco is a city of many, many hills, and I am a man of much fat, and those two things are not meant for one another in the strictest sense. My body does not like me very much right now. Not very much at all.

Posted by SlurpeeMoney at 1:35 AM