We woke up in the single digits am again, and this has become something of a pattern that I am less than thrilled with. The day was spent almost entirely in transit, the first leg involving a Greyhound bus, then a ferry, then more bussing, then a hotel room.

The Greyhound is a pretty simple affair in Courtney. There really aren't a ton of places on the island, and most of them can be reached within a few hours. C. Drove us to the bus depot, we picked up our tickets and got on the bus. Within an hour and a half, we were in Nanaimo and taking a cab to the ferry terminal. 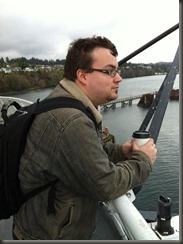 The ferry was definitely better this time around. For those who have never been on a ferry between Nanaimo and Vancouver (bring something of a ferry virgin, I can't much speak for others) they're a lot like a cruise ship in miniature, minus the free ice cream and casino. The one we rode back to Van rocked three decks of seating arranged all over the place, and had a cafeteria that served up some damn fine burgers and sweet potato fries. There was an adorable Greek child just learning English who spoke to us for a while, and then we watched more Buffy.

Once we reached the dock, we took city transit to the Travellodge we would be staying at that night. That took something akin to an hour and a half, but the lodge was a very quick train ride away from the airport, and the plane we were catching was pretty early. We got settled in a bit, and went swimming, which was great. The lodge had a pool that included a hot tub that didn't suck. There was an adorable fat kid swimming with his dad, and we had a lot of fun just sort of swimming around. 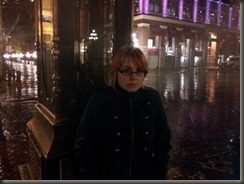 Then we decided to tool around the city some, and got back on the train towards China town.

Admission Time! I had never been to the west coast prior to this trip. Not the Canadian West Coast, anyway, and so whenever anyone would tell me how great the seafood is out that way, I'd mostly be like, "Yeah, whatever." I'm a pretty big fan of eating anything that swims, so I've always wanted to try it, but my jaunts to Vancouver had been mostly stopovers on the way to somewhere that is else. So we decided to eat sushi in Vancouver and put the city's money where its mouth is.

The verdict: negligibly better seafood. We ate at this cute little sushi place in China Town towards the end of the day, and the ramen was mostly amazing, the sashimi decent, and the dynamite rolls - N's pick - were better than average by a long shot. The quality of the ingredients was undoubtedly better, but I didn't notice a significant difference in flavor. The texture was very much improved, I will give it that.

After that, there was another train ride back to the Travellodge and then sleep.

Posted by SlurpeeMoney at 1:29 AM