We woke up at nine thirty for pancakes. This is still a big deal for me, but I’ve got the stove downstairs figured out and can make a pretty damned fine pancake, now. I over-cooked the batch yesterday.

Francis was eating in the common kitchen area outside, so we sat with him for a while and munched our breakfast. Then we decided that today was a good day for a nap. We’ve been doing that thing that people do when they’re travelling. We’ve been focusing on the What Do We Do Today problem rather than relaxing and enjoying ourselves, so today was the day we decided to stay in bed until four in the afternoon and then do leisurely things rather than force ourselves into doing something in specific. 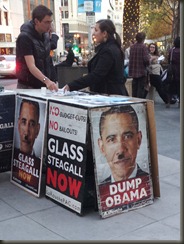 To be fair, there’s only one thing left on our list of things to do. We have been to Alcatraz, visited the Castro, eaten on Fisherman’s Wharf, seen the Golden Gate Bridge, ridden one of those cute rail cars that you see people using to escape from spies in movies, seen the Occupy San Francisco camp, and attended an AIDS rally. For three days, that’s a solid event tally. So there’s nothing wrong with taking a day to just nap and chill out, yeah?

So we did. We slept. And I’m defending this choice to the end.

When we finally woke up we decided that today was the day we’d eat at Joe’s Crab Shack. I’d never heard of the place, but N was pretty excited when she saw it. I guess it had been featured on a TV show, and given that I don’t actually watch television, I probably missed that… series… Still, I like me some crustacean, and if the lady says “I want you to eat crab,” I go “OKAY!” and then eat myself to death on crab.

We didn’t have an easy time finding a trolley this time around, mostly because they weren’t running. We waited for three different trollies to not come before we decided to find another way, which took three or four misfires before we finally found a way to get to where we were going. While we were looking, though, we actually got to see some of these characters that equate President Barack Obama to Adolf Hitler. We actually stood there stunned. We had no idea what to think about that. I mean, it’s one of those weird things you see on television sometimes, you read about it in the news, but its so strange, so out there, that you have to think no reasonable person would ever go there. But go there they did, and they did it to us. An African American lady asked us if we were going to do our part to get him out of office. We tried to calmly explain that we were from Canada, and thus incapable of voting either for or against the man. In the interest of not having our faces 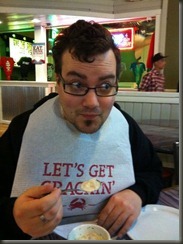 bitten, we didn’t mention that we’re liberal-leaning Canadians, or that, given the chance, we’d be voting for him. She said that “Even Canadians have a chance to change the world for once,” and suggested that we should “Say something about him to the Queen, eh?”

We had no choice. We had to walk away laughing.

The place was not at all what we were expecting at first. We walked up a flight of stairs into a hokey 1960’s style diner with a host in a tie die shirt and and a flourish. The view was sort of meh, looking out over Tarantino’s and San Francisco’s Pier 39. Our waiter was friendly and easygoing, and explained the whole of the process to us: bucket in the middle is for shells, weird-ass fork thing is for breaking the little bastards open, here have a bib.

N was a little disappointed, and the place was definitely out of our price range, but we decided to stick it out. When N was convinced it actually was the right place, we settled into a huge steamed crab meal with shrimp, sausage, and corn on the cob. Then they let us know why the place receives 5-star reviews. This song came on, and all of the servers, the host, and a few of the kitchen staff started dancing.

The dance wasn’t anything incredible, it was a six-step line dance, but it was a lot of fun, and our server was one of the better dancers in the group. The host in tie dye was obviously helping one of the newer guys learn the steps, but all in all it was a lot of fun to see, and a few of the staff really got into it. Mostly, I’m a sucker for kitschy things like this. I think they add charm to what would otherwise be a joyless cracking of crabs for consumption. Not that you could ever convince me that eating crab is a joyless experience, but the kitsch and the fun and the weird added a lot to the evening for me.

There was a birthday party, followed by a guy yelling and a bunch of people screaming and laughing. We later found out that this was a special sort of drink they serve with little shark-shaped shot glasses full of some red stuff. The guy serving the show would yell “OH MY GOD THERE’S A SHARK IN THE WATER!” and they’d pour in the shot while screaming. It looked like a lot of fun.

The whole meal was pretty great.

Next we decided to grab some cookies from Fisherman’s Wharf just down the street and wander the shops there. There was a sword-shop that had some really neat gear in it I’d love to get for the store (two replica’s of the Master Sword from the Legend of Zelda and sharpened batarangs, for example). Apparently getting that stuff into Canada can be a bit tricky. There was a silver shop we stopped in where the lady didn’t pay any attention to us until we were leaving, and a horrible magic shop pretending it had anything to do with Harry Houdini. The tricks they sold looked pretty bad, but I give them a few points for effort. The fake-ass Houdini offering to tell my fortune in the corner was especially bad.

We spent some time kicking out over the bay and followed some kids smoking weed to a part of the wharf where some sea lions were hanging out. We could only barely see the lions, but they were really loud and barking like cuteness. The weed kids were looking at us like we were going to suddenly bust out some badges and guns as we were walking past them, which we found hilarious. We resolved to come back and check out the sea lions during the day time.

We decided to head back to the Castro and see what was going on down that way. Friday is supposedly a party night or something (I’ve forgotten, it’s been so long), and we wanted to be where the coolest people watching would be had. We were not at all disappointed: 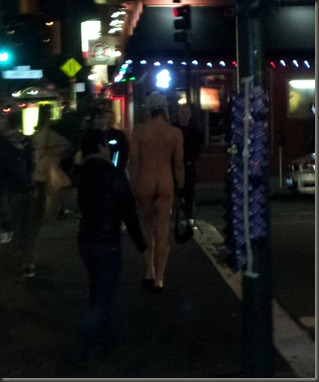 That dude was, according to N, wearing a Santa Hat over his junk. Fellow’s got swagger. I can appreciate that.
Posted by SlurpeeMoney at 12:20 AM

Joe's Crab Shack is a national chain of seafood joints, they're all the same, and pretty generically terrible.