I started today earlier than I like to start anything, a trend I see continuing thought the full ten days. Though they tried to be quiet, I'm something of a light sleeper and the children even being in the same room as me was enough to wake me up and keep me up for just long enough to make it impossible to get back to sleep. So I tossed and turned some, and made the most of the rest that I got before N and C woke up. 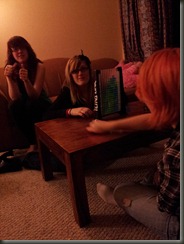 My day started with a brief breakfast of a smoothie and some coffee before roaming around Courtney some in search of real breakfast and a slurpee, something I had been without for a couple of days. That mission completed, we came back to C's house and talked a bit about the night before and the things that had transpired with N's father, talked a bit about the rest of the trip and some money issues. Those things accomplished, C drove us down to N's old high school so that we could meet with some of her old teachers and catch up.

Mr. S was every bit the high school art teacher, with an artistic and creative bit of fluff on his face for Movember and the sort of airy personableness I've come to expect from the artistically inclined. We chatted about the school and his work some, about N's art and her line of work, about our plans for the coming year or so. Then we wandered, talked to Mrs. E, who was primarily concerned with C's love life and Mr. K, who was the charismatic sort of history teacher that everyone loves to study under.

We spent a lot of the day talking to N's old roommate and "mom," the lady that took her in after her father had kicked her out. She's an eccentric older lady with a love for jewelry, travel, gossip and h 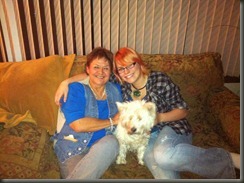 uman rights. She was instantly likable, and the two of them chatted for a long time, with occasional interjections and asides from me. It was an entirely enjoyable way to spend an afternoon, though the lack of sleep from the night before started to catch up with me around halfway through. The experience reminded me some of hanging out with Alice-Mae Abbott in Stettler, a spunky older lady with a story about everything and a powerful view of the world that sort of sucks you in and makes you take notice. I miss that lady.
We came back to C's house after picking her up at work (or, rather, meeting her at her work so that she could pick us up), and I immediately took one of the best naps any man has ever had anywhere. I was woken up by a pretty girl with an offer of supper and promises of parties to come, so through the haze of sleepy time, I ate and got my shot together to head over to A's place.

We played a lot of Tetris: The Board Game and chatted about either things I knew nothing about, or whatever lude topics I could come up with. I predrink harder than these kids party. Amateurs. ^_^
Also, N kicked my butt at Tetris twice. My status as Guy Who is Great at Games is in grave peril, methinks.
Posted by SlurpeeMoney at 1:21 AM